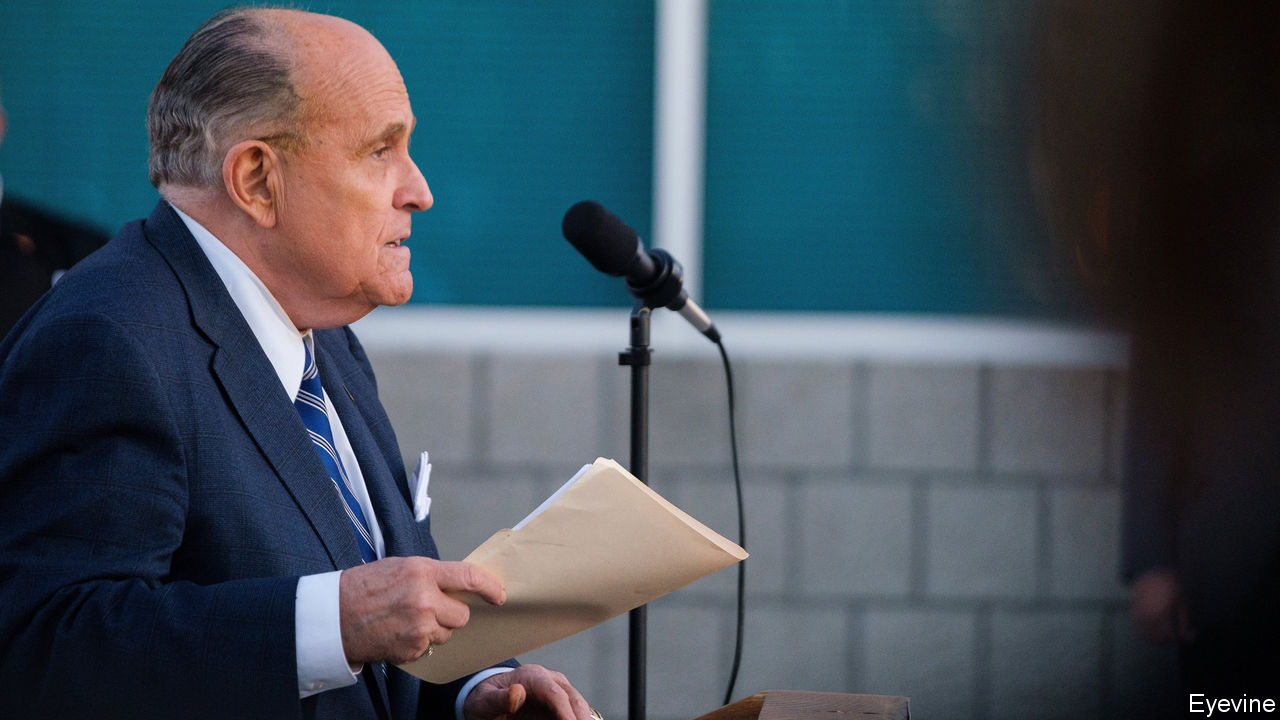 DURING HIS first campaign for the American presidency in 2016, Donald Trump said he wanted to “open up our libel laws” to make suing news outlets easier. Those plans did not materialise. But in the aftermath of Mr Trump’s extraordinary challenges to his re-election loss and amid his second impeachment trial, defamation law is back in the headlines.

Dominion Voting Systems and Smartmatic, both voting-technology companies, have sued or are gearing up to sue three right-wing cable news networks, some of their hosts and two of Mr Trump’s lawyers for claiming their devices were used to steal the election for Joe Biden. Such claims are a central element of the false voter-fraud theory that fuelled the storming of the Capitol on January 6th, resulting in the deaths of five people. Dominion has launched a pair of $1.3bn lawsuits against Rudy Giuliani and Sidney Powell, Mr Trump’s legal advisers—with more to come. On February 4th Smartmatic filed its own 276-page suit against Fox and three of its commentators (Maria Bartiromo, Lou Dobbs and Jeanine Pirro), as well as Mr Giuliani and Ms Powell, for $2.7bn.

Whether potentially defamatory statements are written (“libel”) or spoken (“slander”), the aggrieved party has to clear a high bar in America, where the constitution’s First Amendment protects free speech and freedom of the press. In Britain defendants must usually show their utterances were true or amounted to fair comment. In America it is plaintiffs who have the burden of proof; they lose unless they can prove the defendant’s statements were false but presented as claims of fact. Establishing defamation also means showing the speaker was negligent and damaged the plaintiff’s reputation.

Many defamation cases founder because the statements concerned turn out to be protected expressions of opinion or hyperbole rather than factual claims. Others fail because of uncertainty about the truth of the disputed statements. A prominent First Amendment lawyer who says he has “a natural antipathy towards libel suits” nevertheless thinks Dominion and Smartmatic have “very strong” cases because the claims in question are so clearly presented as factual—and so clearly false.

The Smartmatic lawsuit cites dozens of allegedly defamatory statements. On November 13th Mr Giuliani said on Fox Business that Smartmatic was “founded as a company to fix elections” with technology that is “extremely hackable”. Two days later Ms Powell told Ms Bartiromo on Fox that her client “won by not just hundreds of thousands…but by millions of votes” that had been “shifted” to Mr Biden’s column by Dominion’s and Smartmatic’s software which, she asserted, “was designed to rig elections”. She also suggested that Dominion had ties to Hugo Chávez, a Venezuelan dictator who died in 2013. On November 21st Mr Dobbs, host of the top-rated Fox Business show that was cancelled a day after Smartmatic filed its suit, said the companies had waged a “cyber-attack on our election”.

None of these allegations has been corroborated. But Dominion and Smartmatic say that, however baseless, the charges have severely damaged their reputations and are costing them business worldwide. Dominion says that Ms Powell’s claims are “demonstrably false”. The company was not “created in Venezuela to rig elections for a now-deceased Venezuelan dictator” but “founded in Toronto for the purpose of creating a fully auditable paper-based vote system that would empower people with disabilities to vote independently on verifiable paper ballots”.

The grandiose accusations against Smartmatic are particularly curious, because the company had no role in America’s recent election other than to assist with voting technology in Los Angeles County—where vote totals were never in dispute. “The earth is round,” Smartmatic’s complaint begins. “The election was not stolen, rigged or fixed. These are facts. They are demonstrable and irrefutable.”

Roberta Kaplan, a lawyer representing E. Jean Carroll in a defamation case against the 45th president, believes the lawsuits are likely to overcome the usual hurdles. She thinks Smartmatic’s claims may be harder to pin on Ms Pirro and Ms Bartriromo, though, because they largely handed the microphone to guests who made the outlandish claims and were careful not to voice the accusations themselves. Mr Dobbs was less circumspect, so he and therefore Fox may be, in Ms Kaplan’s eyes, on the hook, along with Mr Giuliani and Ms Powell.

On February 8th Fox’s lawyer, Paul Clement, who was solicitor-general under George W. Bush, filed a motion to dismiss Smartmatic’s suit. (Similar filings on behalf of the hosts came on February 12th.) The network and its hosts, Mr Clement argued, were simply covering a major news event. “An attempt by a sitting president to challenge the result of an election,” he wrote, “is objectively newsworthy.” If hosts merely allow guests to state claims, without amplifying the ideas in their own words, that is a powerful defence against defamation. But Mr Clement’s motion did not attempt to refute each allegation in Smartmatic’s complaint, perhaps because some statements can easily be defended while others cannot—and Fox has legal exposure if any of its employees’ comments prove defamatory.

Another point of contention is whether the voting companies are “public figures”, about whom American defamation law enforces a more rigorous standard that would make their claims harder to sustain. If so judged, the companies must prove that Fox’s hosts and Mr Trump’s lawyers acted with what the law terms “actual malice”, meaning that they either knew the statements were false or the speakers showed “reckless disregard” for the truth, as opposed to simply negligence. Mr Clement argues Smartmatic is “clearly a public figure” and should have to clear the higher bar. Ms Kaplan disagrees: dragging an otherwise obscure company into a cable-news controversy does not transform it into even a “limited-purpose public figure”, she says, especially since it had such a minor role in the 2020 election. The Supreme Court has held that only individuals who “have thrust themselves to the forefront of particular controversies” count as limited-purpose public figures.

But even if a judge sees Smartmatic as a public figure, the company may have enough evidence to proceed against Fox. And it may have the strongest case against Mr Giuliani and Ms Powell, as Mr Clement’s motion seems to acknowledge: “If those surrogates fabricated evidence or told lies with actual malice, then a defamation action may lie against them.”

Mr Trump’s lawyers may face the most legal jeopardy, but the networks seem aware of their own vulnerability, too. After Dominion and Smartmatic warned Newsmax they might sue, its anchors read canned disclaimers on air and cut off Mike Lindell, a prominent businessman who advised Mr Trump late in his presidency, as he repeated claims of election theft. “We don’t want to relitigate the allegations that you’re making, Mike,” said Bob Sellers, the anchor, during the chaotic exchange, before walking off the set in mid-interview.

OANN has been alternately confrontational and conciliatory as lawsuits develop. In December it responded to Dominion’s request to preserve documents for a possible legal action by demanding that Dominion preserve documents, too, so OANN could attempt to prove the company engaged in election fraud. But when the network aired a film by Mr Lindell repeating his allegations, it prefaced the broadcast with a lengthy disclaimer.

The First Amendment grants plenty of room for robust debate; plaintiffs seeking damages for defamatory statements face an appropriately steep climb. On the rare occasions when libel or slander claims stick, the defamed entity is typically the only compensated party. These voting-technology suits may offer a wider public benefit: curbing the spread of disinformation that destabilises democracy itself.

Quote of the day

Those who choose to stick will never be unstuck.
-Peter G. James Sinclair
Famous Quotes Courtesy of iQuotesFamous.com

Quote of the Moment